I haven't bought a CD since the iTunes Music Store became available in Canada in 2004. In the beginning the music sold on the iTunes store had DRM but I had an iPod so I've been pretty happy buying music from Apple. Then came Steve Jobs' thoughts on Music, and soon after music was freed from the shackles of FairPlay DRM.

I long ago stopped caring about disc art and booklets and lyrics. The convenience of not having to rip a CD and then store it somewhere, not to mention being able to listen almost immediately after clicking the buy button was worth it. Being able to pre-order an album and having it download automatically on release day is wonderful too. All this connivence, often for less than what I would pay for the physical disc was a great compromise.

In considering a switch to streaming music I'm still not entirely comfortable with not really owning anything. I know it seems foolish, but there's still a part of me that wants to own my music. Buying an album meant that you were part of a tribe, a group of people that really loved that band or a certain genre of music. With an all-you-can-eat buffet of music at your disposal, the need to curate your collection due to limited funds is gone. At the same time, being able to listen to almost anything you can think of is really appealing too. I wonder though, with all that choice, will I listen to music the same way? Playing a disc on repeat until I knew all the lyrics by heart and could anticipate every guitar strum and drum beat. Will streaming music alter our music listening habits as much as bite-sized tweets and texting have altered our attention span for reading long-form writing? I don't know. Maybe that started the day we could download mp3s from Napster, or buy singles from iTunes without buying the entire album. 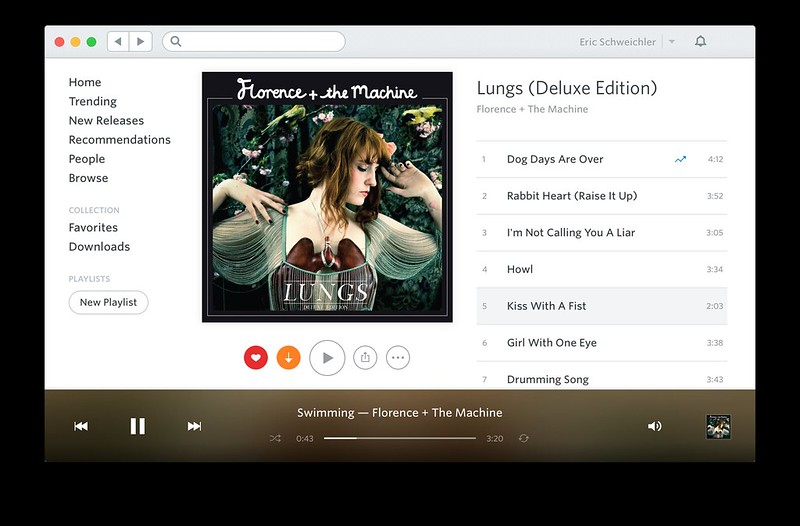 I was using Rdio from time to time to preview albums and listen to music at work as a free user. I finally gave in eariler this week and started an unlimited subscription. There are so many great albums that came out in the last couple of months and I was starting to feel the pinch. There is a lot of debate about how these services compensate artists for their work, but I figured it wouldn't hurt for me to give it a try. After all, someone must be getting some portion of my monthly subscription fee right?

Over the last few days I've played with the various Rdio apps and it's been really interesting. Remote play is a very neat feature. When I've got music playing on iPad, I can change the current album and user other player controls via the Rdio app on my Mac. This is pretty handy at work when I don't want to poke around behind my iMac to find the headphone jack but I don't want take my hand off the mouse or keyboard to fiddle with the music on the iPad. It feels like magic when it works, and it is totally infuriating when it doesn't work. It works well more often than not, but sometimes the iPad app stops responding to the remote commands from the Mac App. Then I spend more time fiddling around to get things connected again than I'm saving in the first place.

I spend a lot of time commuting each day, and our Canadian cellular data packages aren't the best in the world, so offline mode on the iPhone app is great feature for me. I can select albums or songs I'd like downloaded to my phone so that I don't need a data connection to listen to music. However, the iPhone App takes a long time to download the music that I select. I'm not sure if that is a Rdio server issue but other apps on my phone don't seem to have problems downloading similarly sized files. The interface accessing downloaded music isn't the most intuitive and it took me a while to find all the albums that I had downloaded.

When I'm driving the Rdio iPhone app works just like the standard iOS music player. The iPhone connects to my van via bluetooth and I can control track selection via the buttons on my steering wheel. Great.

The Desktop App is basically a thin wrapper around the Rdio website and it works well enough, but there is no way to download any music for offline listening. It's handy at work since I don't have my whole music collection on my work computer, but it seems foolish to use my monthly bandwith streaming music. I can understand the technical challenges involved in supporting offline listening on the PC where it could be much easier to circumvent any security measures and just access the files directly. That being said there's always Audio Hijack. The desktop app supports the media keys on the Mac keyboard, which is great because if it didn't that would have probably been a deal-breaker for me. I try to use the mouse or trackpad as little as possible.

It is a bit inconvenient that there isn't a way to access my iTunes music library from inside the Rdio App. Having two places where my music lives is not ideal and having to remember in which App a certain album lives just means that over time I'll probably listen to less of the music I have purchased from iTunes. There is an option to let Rdio scan your iTunes library and then add all to your online account but posts on the Rdio forums make it sound like this feature doesn't work very reliably so I'm reluctant to try it, which leads to the problem I just mentioned. A solution that is fully integrated into iTunes would be the ideal for me.

Right now I'm happy with the service. At $9.99 a month I think that I'll definitely get my money's worth while I wait to see what Apple plans to do with the Beats Music. Like most Apple products, it probably won't do anything that hasn't been done before - I just hope that it will work better.

« The Wolf is Dead, Long Live the Wolf
I Bleed Six Colours Too »