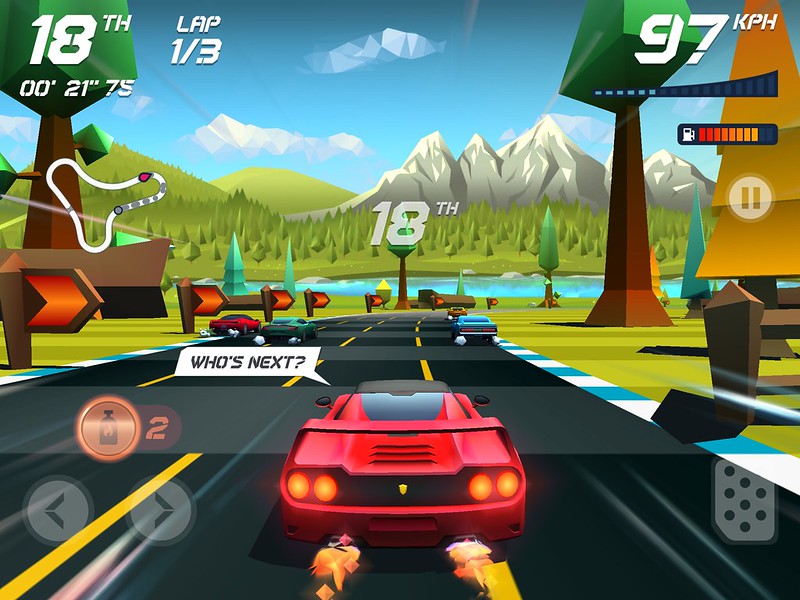 Last night I decided to open up the App Store on my iPad and see what was new. The Editor's Choice banner for Horizon Chase - World Tour caught my eye immediately. The clean, colourful style and outrun vibe called to me. After checking out a few videos on youtube, I couldn't jam my thumb on the TouchID sensor fast enough to spend $3.49.

I've been a fan of these types of arcade racing games for a long time. I have some dusty memories of Night Driver for the Atari 2600. It really doesn't hold up well. I also have fond memories of playing Pitstop 2 at a friends house on the Commodore 64. There's the unforgettable music of Outrun and there was Rad Racer on the NES.

For me the best of all these types of games was Top Gear on the SNES. I rented that game a whole bunch of times. It also had incredible music.

Built with Unity3d, Horizon Chase is a beautiful update to the legacy of the 8 and 16-bit games. It feels like those classic games while fixing many of the shortcomings of the traditional techniques used in racers of this style. The line rastering and sprite scaling techniques in the old games were amazing at the time but the clean low-poly trees and roadside objects is a huge improvement and really make things feel solid. The low-poly dust clouds are perfect.

If you are interested in how classic games like Outrun work, there is a fantastic four-part javascript tutorial over at Code Incomplete. I've actually been working on and off on a similar game based on the classic techniques, but after seeing and playing Horizon Chase, I think I'm going to take a different approach with my project.

The Horizon Chase Tumblr is loaded with wonderful details about the development of the game and a fantastic interview with the Barry Leitch, the composer of the soundtrack who also composed the great soundtracks for Top Gear and Lotus Turbo Challenge.

Time to end this post and get back behind the steering wheel!

« Untitled Project
A Cure for the Beta Blues »