Some people grew up with Mickey Mouse and Donald Duck. While I liked Disney stuff well enough, my world was ruled by Super Mario. I had the Super Mario Bros. bed set. I dressed as Mario for halloween at least twice. My parents even dressed as Mario and Princess Peach one year for halloween. I still remember the morning before school in 3rd grade when I finished Super Mario Bros. for the first time, I was king of the world for a day. Then came Super Mario Bros. 2. It was weird and different. Throwing Vegetables, riding on enemies, SUBCON? I mastered that game and vanquished Wart and his minions. My Mario obsession continued.

Then in 1990, all the Super Mario Bros. 3 hype began. I was the target of this ad campaign.

I first encountered Racoon Mario at a local arcade running on a PlayChoice 10 machine. The kid playing before me was somewhere in World 2 (desert land) and I was completely blown away. I remember that when it was my turn to play, on course 1-6 I just jumped right onto one of the tracks for moving platforms and didn't understand at first that I couldn't walk on them. I fell to my death and my time ran out but it was still amazing. How could I possibly survive the long wait for the game to be in stores?

A few months later when somehow I knew the release date (games didn't really have release dates like they do now, or at least we didn't know about them) and I gave my father a mission. He had to go to the mall and buy a copy for me on day one. My father did not disappoint! When I came home from school that day there it was! And so began a lasting love for this game. 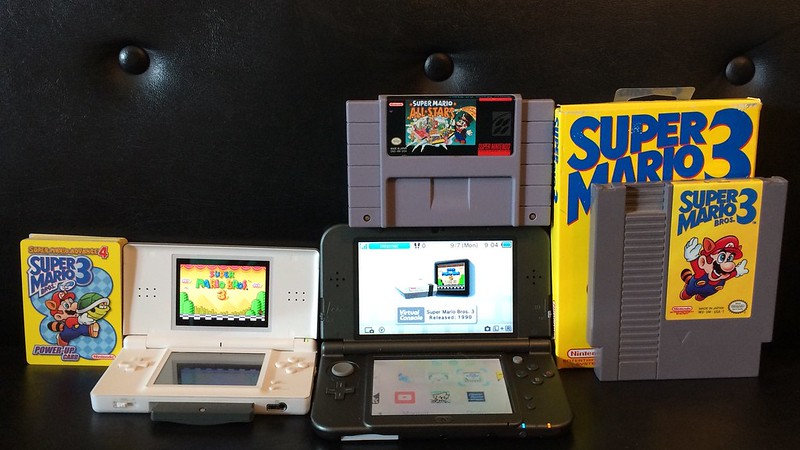 While I think that Super Mario World is a better game in almost every way, SMB3 was an incredible evolution of the original Super Mario Brothers. gameplay. It features more "detailed" sprites, better use of color, a huge variety of enemies and locations, more power-ups, suits, secrets and a larger world, All the things that are now staples of the modern 2D Mario platformer were born with SMB3. Some individual levels weren't huge but there was always some new concept to learn, a new configuration of platforms, new enemies or puzzles to solve. The world map tied the whole adventure together. It felt like the Mushroom Kingdom could be a real place and not just a random collection of courses to complete.

I was already writing computer programs at this time, so I knew a bit about how some things worked. It wasn't until I saw this article about the making of SMB3 in Nintendo Power that I really understood how sprite based games were built. Seeing the CGCAD Machine and hand-drawn courses started an obsession with drawing my own Mario courses and blocks on graph paper. Before reading this article I don't think I knew who Shigeru Miyamoto was. Nintendo posted a great Video Interview with Miyamoto and Tezuka that shows more about how SMB was designed on paper before being given to the programmers.

I can say without exaggeration that Super Mario Bros. 3 is directly responsible for cementing my interest in video games and computer programming that has lead to a career making games for kids.

Now, 30 years after the original Super Mario Bros. was released in North America, I can finally fulfill my childhood dreams of making real Super Mario Bros. courses with Super Mario Maker. Seeing those classic sprites again in new ways has brought me back to playing SMB3 again. The game is still just as captivating after all those years.

This flickr gallery contains some scans from my Mario Mania guide. I dragged that thing to school everyday. It's pretty ragged but I love those chapter illustrations. I'm still waiting for Nintendo to make a new Mario Game in that style. The New Super Mario Bros. aesthetic is awful.

An interesting historical tidbit, if it wasn't for Super Mario Bros. 3, we may have never had Doom.

Update: On a recent trip to Japan I visited Super Potato and picked up this beautiful famicom version of Super Mario Bros 3.