During the summer of 2002, before I moved to Canada, I knew I needed to find a dog to show. Dachshunds are nice but being a big fan of wolves I really wanted a northern breed dog. It was a toss up between the Siberian Husky or Alaskan Malamute but the choice was pretty easy, Malamutes were just too big! Ray was able to find a breeder with a litter of puppies willing to sell to a show home.

Since he was to be a show dog, I didn't even get to him pick myself. I received photos and had time to think about names until I drove up when he was ten weeks old. The little black and white puppy in the photos became Denali, named after the ice cream, not the SUV. 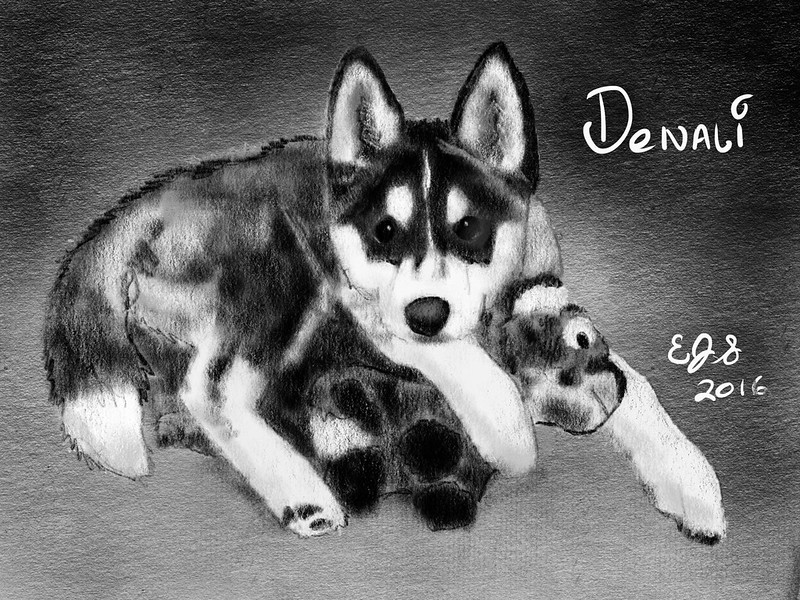 Denali and I had a lot of firsts together. He was my first show dog and my first champion. We spent two years on the local show circuit learning the ropes, collecting ribbons and even getting a group placement or two. We learned about dog mushing together, going from novice musher and team dog to a capable musher and lead dog who knew his right and left better than me.

He wasn't the first dog I took to obedience class, but he was the best, until his Daughter Spryte that is. Denali accompanied me on almost every trip to visit my parents. He liked spending time with my father, watching tv as a big lap dog and eating apple slices. While on the road his favourite thing was a strawberry milkshake from McDonalds.

He always worked hard for me on the sled, with a tight tug-line and never a complaint. As a running partner he was always accepting of newbie dogs on our team, as long as they pulled their weight!

He liked to "talk" as Siberians often do. Ray thought him "Tell me a story." He would always offer quite a tale in response, especially if we had been away for a while or dinner time was near.

He is the model and inspiration behind the TrailRoc Kennels logo.

The only thing that Denali didn't do well was prepare us for living with other Siberian Huskies. From the moment I brought him home he was special - cooperative, gentle and easy to live with. You could leave a potato chip in front of him and he would wait until he was told to take it. He never ran off or climbed fences or dug holes. Equally happy to be running in harness or watching TV from the sofa. We didn't realize how good we had it until Cinder arrived A few years later and began our real education in the ways of Siberian Huskies!

In 2012 Denali sired a litter of puppies and one came back here to join the TrailRoc team. Like her father before her, Spryte has become a good lead dog and has an aptitude for obedience work.

Denali retired from the sled team fully at the age of 12 and since then was happy to oversee the kennels or spend time in the house with us. 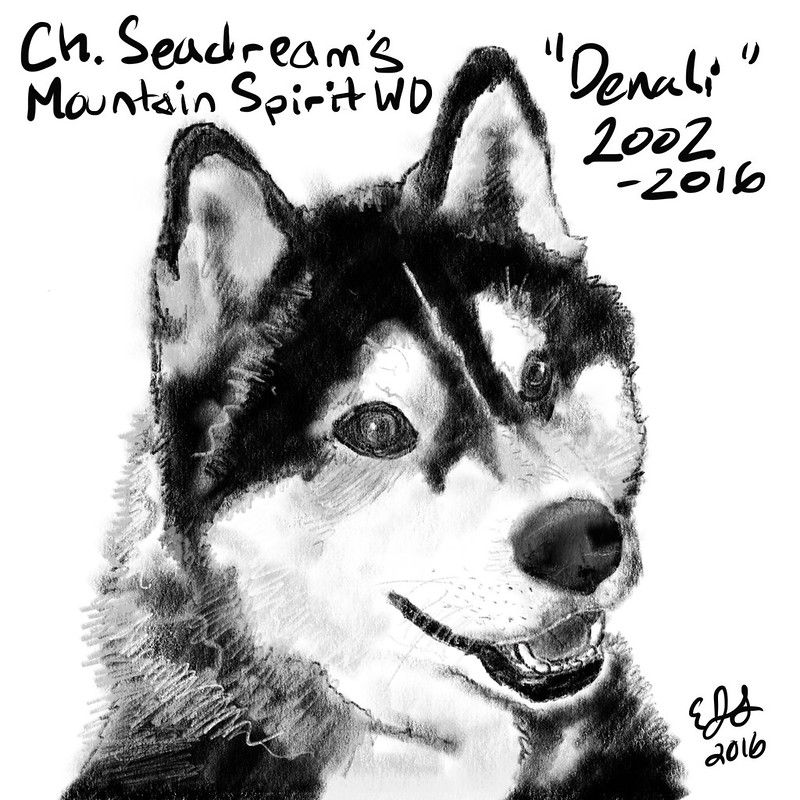 Goodbye my friend. The kennel won't be the same without you around, and you'll never be forgotten.