Over the last few months I find myself in the good fortune to be up to date with most of the current line of Apple products. I started writing various posts about AirPods and the new 13" Touch Bar MacBook Pro but decided to put them all together as a sort of status update. 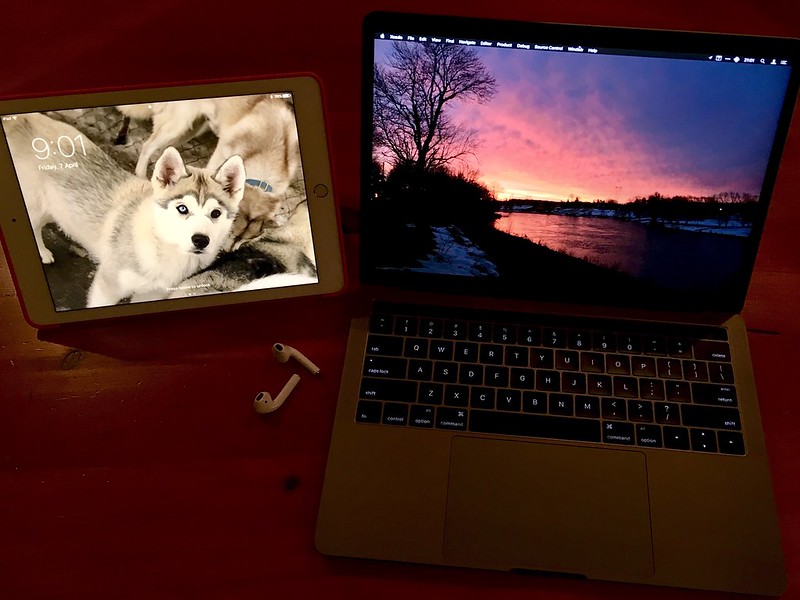 I really loved the previous incarnation of the 13" MBP. It was the perfect machine for me. Small and light with a beautiful retina screen. Even though it was a couple of years old there really wasn't any reason for me to upgrade. Mushometer doesn't take that long to build in Xcode and even Unity was running fine.

I really wanted to play with the Touch Bar!

A lot of people have complained about the keys on the keyboard. It did take a week or so to get used to, but the new Keyboard seems fine to me. I like the sound and feel of the keys a lot. The new arrangement of the arrow keys is terrible and even after a couple of months of daily usage I fumble around with it. I think the backlighting in the keys is much nicer now.

Authentication At My Fingertips

Having the Touch ID sensor on the keyboard is a fantastic addition to my workflow. I have two accounts on the Mac, one for home and one for work. Each account has it's own finger, so switching between them is as easy as pressing down on the Touch ID sensor. No more passwords or user switching menu.

I've used Touch ID to buy a few things on the web with Apple Pay and that's fantastic. Maybe even too easy.

Touch ID in dialogs is nice but it is not yet integrated everywhere in Mac OS and third-party apps so it's hard to depend on it. It is always a pleasant surprise when I see it though.

I'm not entirely sold on the Touch Bar. I don't look at the keyboard when I type so I miss whatever is displayed on the Touch Bar. I do however like the volume and brightness controls being sliders. I find myself unintentionally hitting the escape "key" often. I learned that I have a tendency to rest my hand on the keyboard in such a way that ring finger is resting on the escape key. Even after three months of daily use I find myself clicking links in Safari that don't open because I am also resting a finger on the escape "key". It happens so often that I would turn the key off if there was an option and map it to the caps lock key instead. Maybe I'll eventually be able to train myself not to do that, or someone will start a Kickstarter campaign for an escape key guard...

A neat upside of the Touch Bar is that you can use it to seek though the adds on YouTube. Shh, don't tell Google.

Siri on the Touch Bar? Nope. I finally removed the button from the touch bar after accidentally hitting it too often.

I do have still some occasional fun with Touch bar Piano, much to the displeasure of my colleges at the office.

This is my first MacBook with a Force Touch Trackpad. I like the sound it makes, and to me if feels like I'm really pressing something. I did have a bit of trouble adjusting to dragging and triggering Force Touch, but after some tweaking in the System Preferences it hasn't been a problem. The larger surface area is appreciated.

Yes, I bought them all:

USB-C to USB Adapter - Picked up a pair of these to connect things like Mice and SD Card Readers. Not much to write home about but they were only $10 each.

USB-C to Lightning Cable - I could use one of the adaptors above when I need to debug on an iOS device but it was just simpler to have a dedicated cable for doing this.

USB-C Digital AV Multiport Adapter - I use this at work so I can connect power, an external monitor and have an old fashioned USB port available all in one place. Works as advertised.

Belkin USB-C to VGA Adapter - I really dislike the fact that I have to own this thing in 2017 but there are still tons of VGA only projectors out there.

AUKEY USB C to Ethernet Adapter - At home I'm 100% on wifi but at work I need speed in a crowded office with a lot of devices on wifi. It's just there, doing what it does and I haven't yet had a problem with it.

At launch of the new MBP Apple heavily discounted these accessories but at the time of this post it adds up to $230 CDN worth of cables and dongles. All that just to use this already more expensive MacBook Pro in a world where things like VGA and USB are common and will be for quite a while yet. That's pretty painful.

Unlocking with Apple Watch is really neat. It might be slightly faster for me to type my password or use Touch ID but it's really nice just to open the computer and be back at what I was doing.

Migration Assistant failed twice when trying to restore my Time Machine backup. I'm not sure what the point of Time Machine is if I can't restore a backup reliably. I may have to look into an alternate solution for local backups. At least everything is safe with Backblaze. I ended up doing a Mac to Mac migration and while it took a while longer everything came across fine.

"Cassian said I had to"

With each new mac comes a new name. First there was Amaterasu, then Pandorica and now K2SO. I think it's a fitting name for a space grey MacBook Pro with the solid black logo. I love the space grey look. The darker body, black keys and black bezel of the screen all look fantastic together. I won't miss the light-up logo either. It's a slick machine.

Even though the Touch Bar is a bit of a disappointment, and I need an extra dongle or two in my bag now, I do really like this machine. It's thinner and lighter and the battery life seems fine. The space grey finish is a nice change and over all it's a nice minor update to aesthetic that I already enjoyed with a faster chip and a bigger SSD. Trying to live on 128GB meant I was always managing files.

I've had the AirPods for almost three months now and I know it sounds pretty insignificant with the current state of the world but I can't imagine how I survived before.

First test of staying in was to mop the kitchen floor. Twenty minutes of vigorous mopping and they didn't budge at all. Also survived a mobbing by the dogs when I went out to the kennel with them in my ears. Recently I was wearing the regular EarPods and even though I had the cord tucked away someone managed to jump up and snag the cord with a paw. The EarPods ripped out of my ears and smashed onto the concrete floor. The right EarPod was completely smashed. Amazingly it still worked but wasn't very comfortable to use. Now that the cord has been eliminated this won't be a problem.

On the rare occasions where I forget to charge them and I need to wear wired earbuds it drives me insane to deal with the cord now. There's no going back.

I was brave enough to wear them while out on the dogsled with the team and they stayed in for our entire 8 kilometre run.

Audio latency seems near imperceptible and down right incredible compared to the Mpow Bluetooth earbuds I used before. You get what you pay for. I can play games like Crypt of the Necrodancer which depend on timing and listening to the beat of the music without difficulty.

Sound quality is great, maybe better than the wired EarPods since they stay better in my ears.

Paring is easy and witching from iPhone to iPad to Mac and back again just works.

I never took the time to write about it because the hardware update wasn't that sexy. It looks the same as the original model. I took the opportunity to get the Black Aluminum model I originally wanted. The new screen is a bit of an improvement when outdoors. The WatchOS 3 overhaul of how apps are accessed really makes it easier to use but it's the new processor that takes the Apple Watch from a neat toy to a useful tool. Apps launch faster and are much more responsive. At the end of each 18 hour day I still have 60% battery remaining.

A year ago when the new iPad Pro 9.7" was announced I immediately upgraded from my iPad Mini 2. The difference was incredible. I challenged myself to work as much as possible on the iPad and for about six months I did a pretty good job of it. I learned a lot about what is easily possible on an iPad and what is extremely difficult. Hopefully Apple's recent acquisition of Workflow bodes well for the future Apple's commitment to the iPad and iOS as productivity platform. Drawing in Procreate and Linea with the Apple Pencil is great. I still love the iPad Pro, but it has now become a secondary device for me.

The original Mac Mini was my return to the Mac. They are still the cheapest option if you are interested in switching to a Mac. The other Mac here is a 2013 mini that was really getting long in the tooth. Boot time on the slow internal drive was around 15 minutes and even with a RAM upgrade anytime anything needed to be swapped to disk it was an eternity. I purchased an SSD upgrade kit and took an evening to disembowel the mini and install the new drive. The performance improvement was dramatic, booting in just 20 seconds or so. It's too bad the mini is in such a state of neglect right now. With a few minor changes it could be a fantastic starter Mac once again.